Social Selling With Twitter: Best Ways To Do It

Social Selling With Twitter: Best Ways To Do It 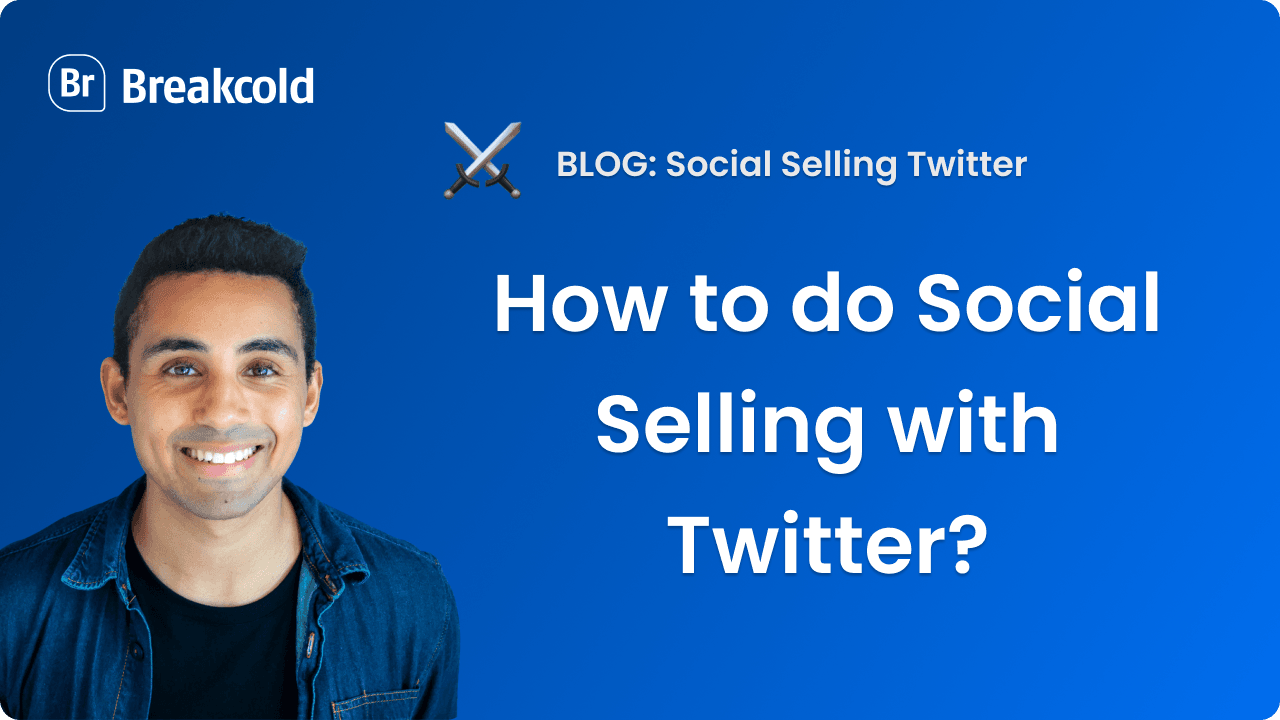 Traditional lead generation is working less and less. On the other hand, social selling with Twitter is on the rise.

Twitter wrote an article about the topic but it's pretty poor. That's why we deciced to write this article :) 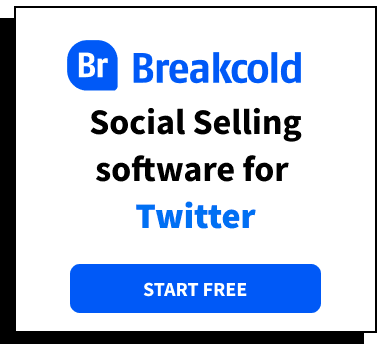 Benefits of social selling on Twitter for your business?

For B2B sales, Twitter is the place to be, period. The fastest growing agencies and startups we see these days are using Twitter. Stats don't lie on this topic:

So basically if you're not leveraging Twitter to grow your business, your missing out!

If you want to drive more business from Twitter, you need to have a crystal clear social selling strategy. If you're not serious about it, you might get a few inbound messages here and there but it will lead you nowhere in the long run.

You need to work on 4 pillars to nail your social selling strategy: your Twitter profile (1), your target audience (2), your engagement with Twitter users (3) and your Tweets (4) 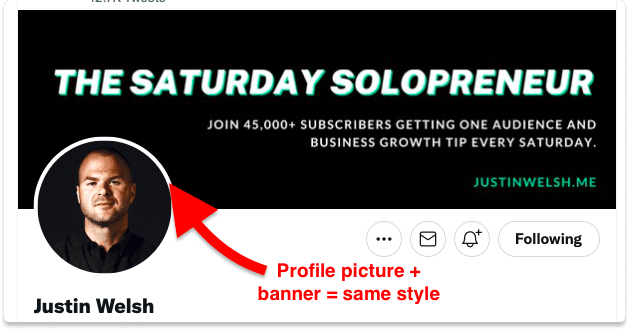 Think of your Twitter profile like a second landing page. You need to optimize it for profile views and clicks that lead to your business offer.

I'm sure there's certain faces you always remember when you scroll your Twitter feed right? They have flashy pictures, memorable bios and more. It didn't happen by chance? Let's see how you can do it too! 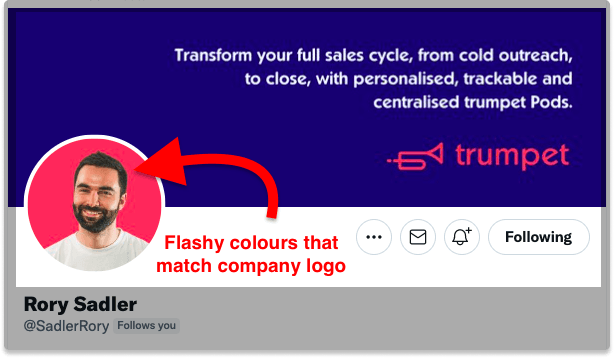 First, you need to get a quality picture, it's mandatory. You profile picture needs to look professional quality wise.

Secondly, try to match your profile picture with your banner.

Finally, here's a list of French B2B Twitter influencers, you can notice that they all have one thing in common: flashy images. 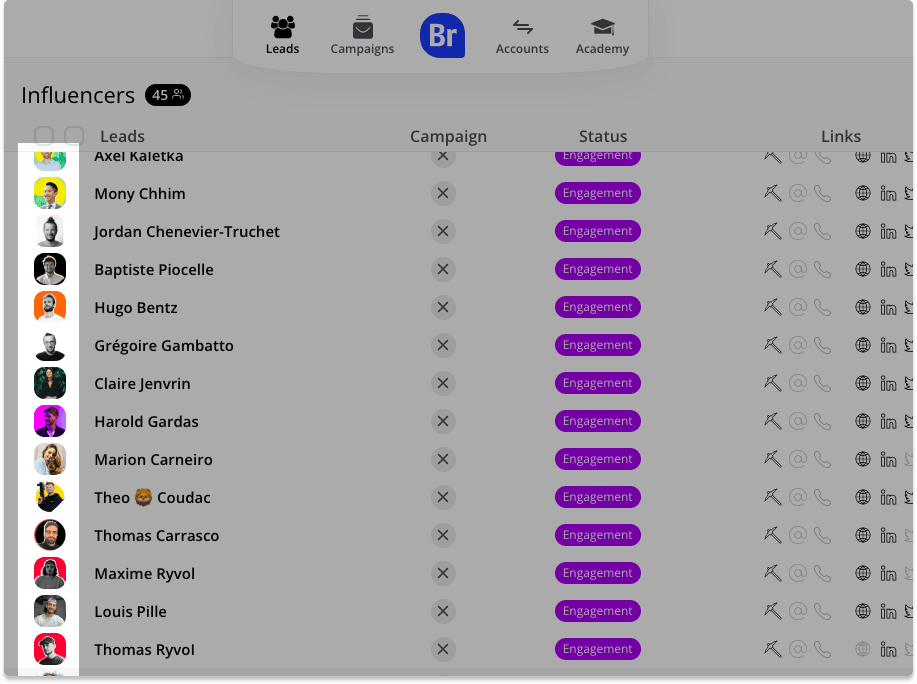 Note: this is my personal engagement list in Breakcold 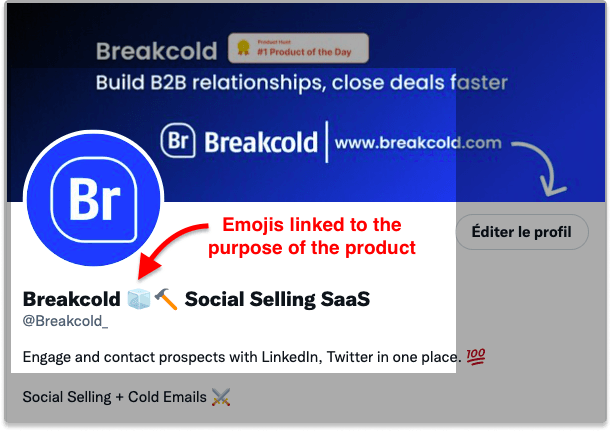 Note: using the word Social Selling SaaS in the name boosts this profile in the Twitter advanced search

Social selling on Twitter is deeply connected to personal branding. You need to be creative even with your name. Use an emoji that people will automatically associated you with.

This emoji will be an extension of your brand. You can then use it in your comments, posts and so on. 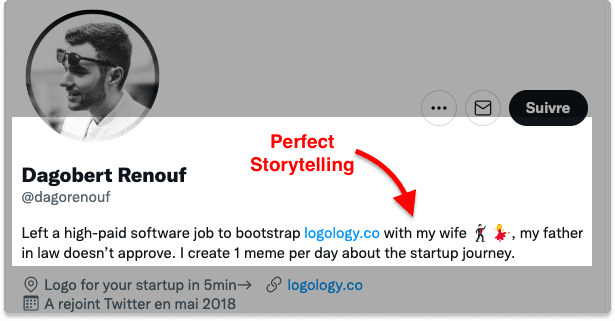 Note: Dagobert Renouf is a perfect example of a successful Twitter Social Seller

Your headline is basically your sales pitch. Explain in 1 sentence what value you provide with your business.

A good storytelling is the recipe for a great bio. You need to hook people to your Twitter profile, to make them check out your offer. For that, you want to make them feel close to you. 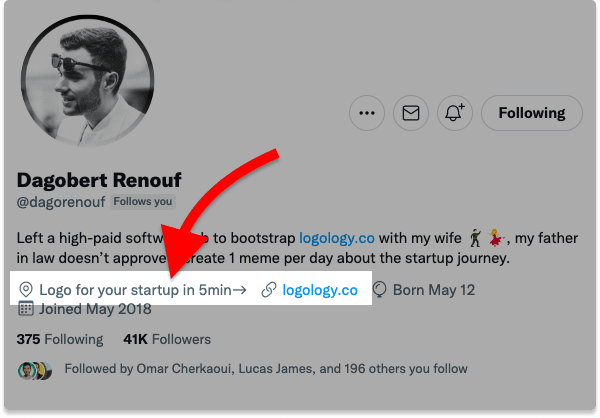 Note: Use the location section to create a cool CTA like Dagobert's startup, Logology

You basically have 3 ways to make call to actions with Twitter:

If you want to have multiples links, you will need to use tools like Lintree.

2°) Find relevant people in your niche 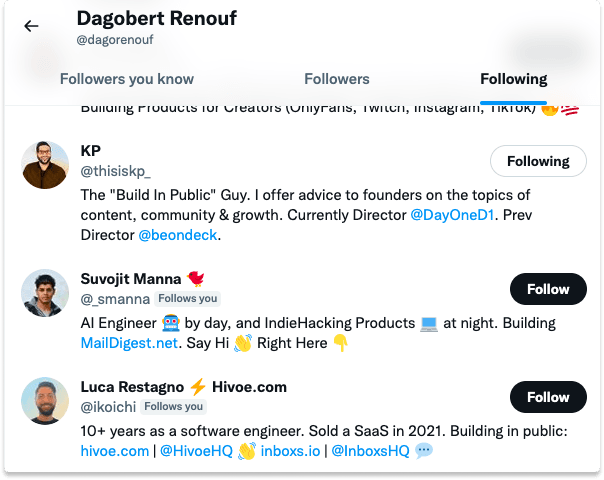 To be successful at social selling with Twitter, you need to build relationships with people in your industry.

If you sell a product or a service, surround yourself with potential distributors of your solution (1) and potential customers (2).

Use the advanced search bar 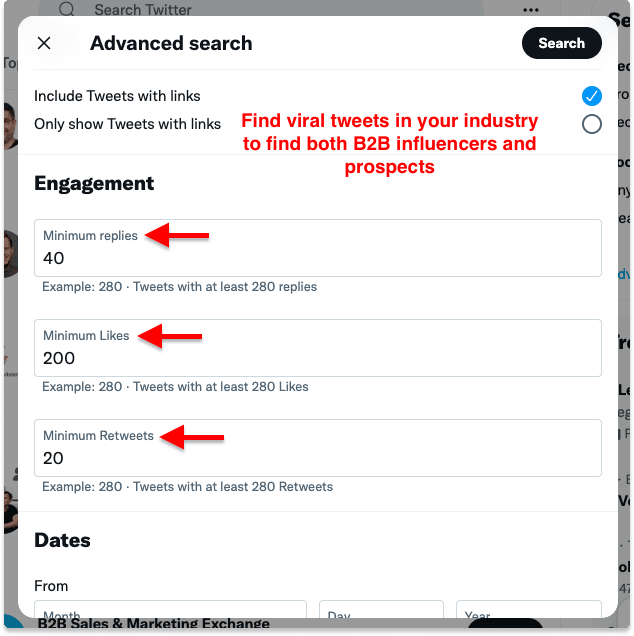 The advanced search bar of Twitter is such a powerful tool. Yet, it's not used by most social sellers on Twitter :'(

The advanced search bar is like having a free LinkedIn Sales Navigator but for Twitter. Do a simple search and then clicked on advanced search options and play with it to find top tweets, top accounts and way more!

Twitter influencers are useful for social selling because they will amplify your reach if they engage with your content. But they can also become distributors for your product or service. So building strong relationships with them is key.

1/ Find them in public lists 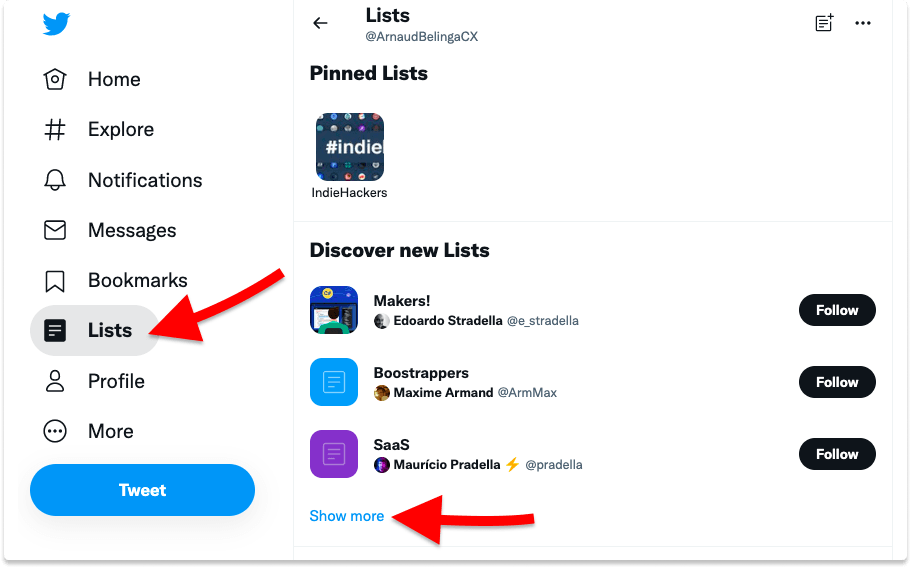 Many Twitter people build lists of their favorites B2B influencers and make them available to the public. You won't be able to edit or add people to these lists but still it's a** huge time saver**.

2/ Find them in your feed 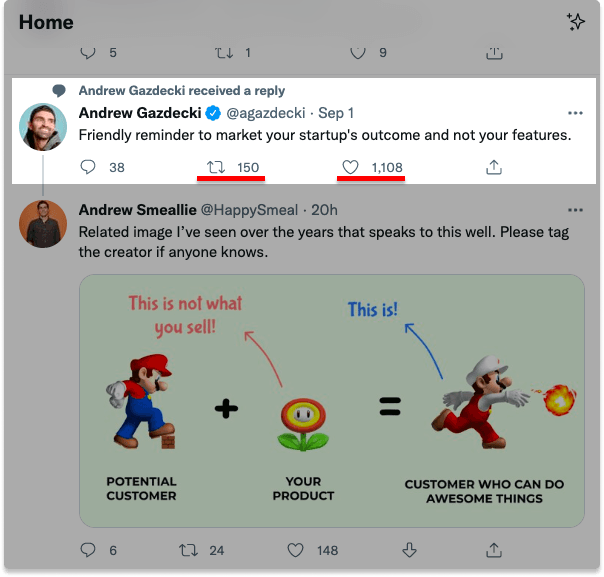 Once you have followed a few people you like on Twitter, you will quickly notice the tweets that blow up in your niche. From there, it will be easy to find more and more relevant people to engage with.

3/ Look at their following 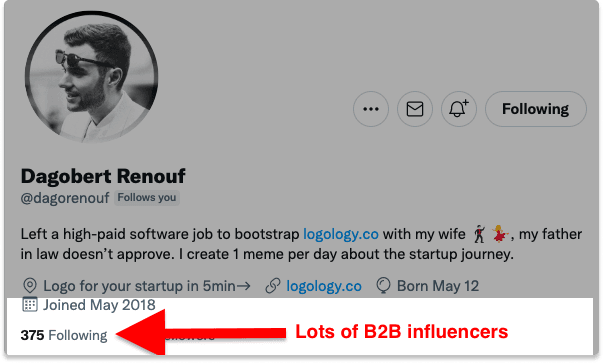 Note: this how I personally found most of my favorites accounts

Most Twitter influencers don't follow that many people. They tend to follow other influencers, make sense right? Therefore, you if you like one people in your B2B industry, look at their following, it's literally a gold-mine!

This is my playbook to find prospects:

The search bar of Twitter is powerful enough to find any types of prospects for your social selling.

Here's a quick idea on how to do it: 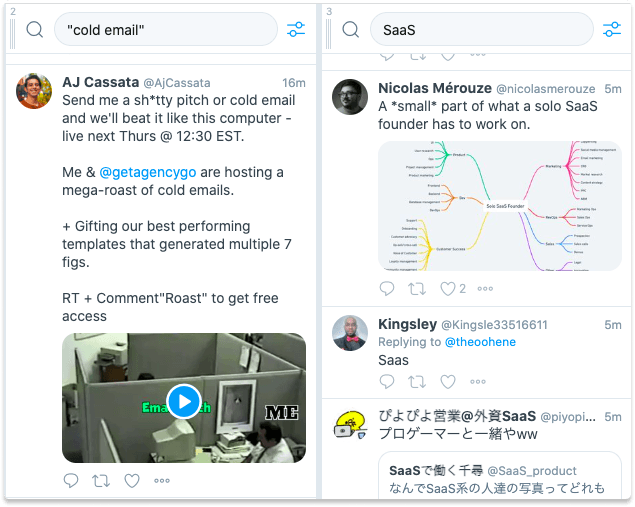 Note: in this picture, I track cold email tweets and SaaS tweets to find prospects

TweetDeck is an early tool that has been built on top of Twitter initially. Then Twitter bought the tool but never really improved it a lot. Still, you can use TweetDeck as a Twitter social listening software to find prospects to engage with.

The best part of it is that it's a free tool :)

3°) Engage with your audience and prospects

The most important thing about social selling with Twitter is engagement. Why?

Advantages of this method:

Disadvantages of this method: 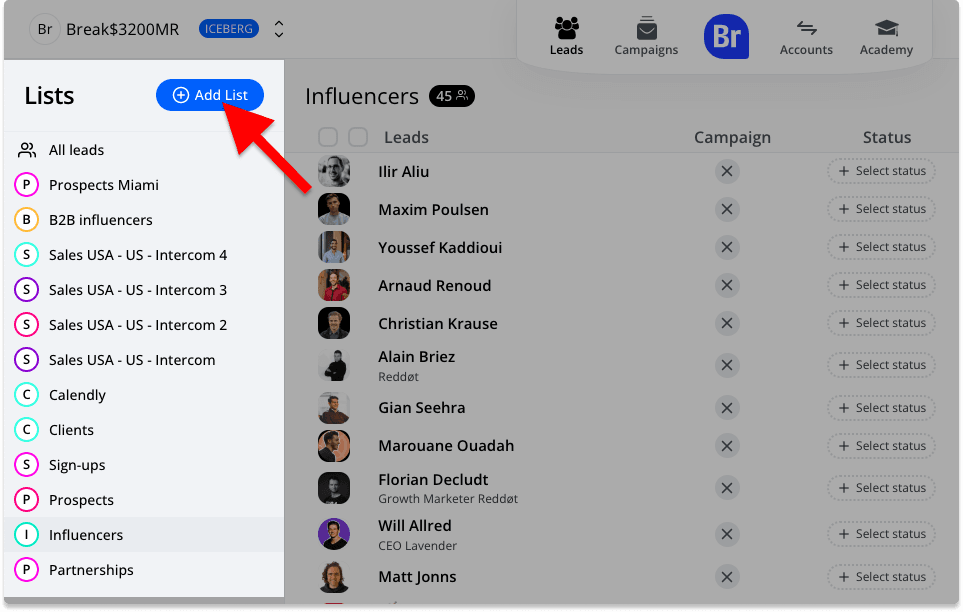 I use Breakcold to easily import prospects into my engagement list.

Advantages of this method:

Once I know which Twitter profiles I want to engage with, I put them into different lists.

3/ Segment your lists with tags 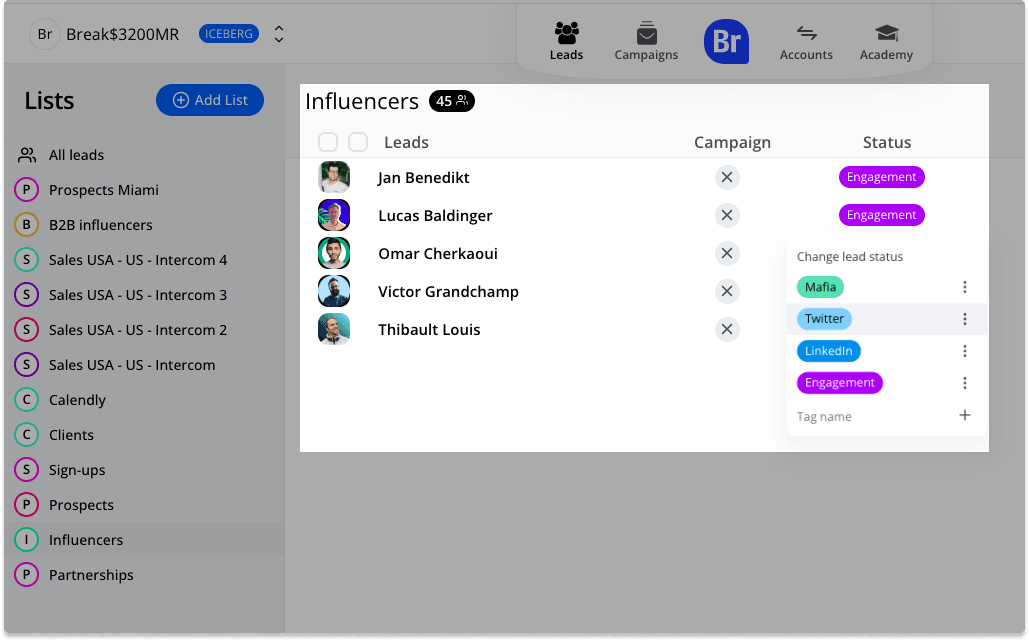 To nail my social selling on Twitter, I also add tags to profiles so I can be even more productive when it's time to engage with them.

Engage with your lists to stay top of mind

Engaging with people to build B2B relationships is key in social selling with Twitter, here's how you do it. 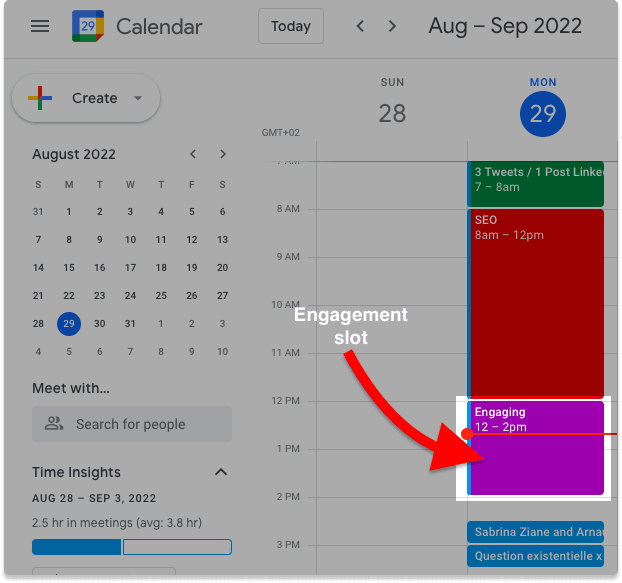 If you're serious about social selling, you need to make it part of your sales routine. That's why I created engagement time slots in my calendar.

From my experience, 1 hour per day is good enough. Not all your prospects and not all B2B influencers post every single day.

Therefore imagine you have like 10 B2B influencers on a regular basis and let's say 100 prospects. 80% of your time will be taken by B2B influencers and only 20% will come from your prospects because they tend to post way less daily.

Note: this how I interact with my prospects using Breakcold

Once you've created your engagement time slots, go in deep work mode and engage as fast as possible with your lists.

It's painful to open hundreds tabs a day so I use Breakcold to accelerate the Social Selling process. It saves me around 10 hours a week.

3/ Send DMs when it's relevant

Note: company news populate when you're about to contact a lead

When you engage with your lists, send Direct Messages (DMs) when you encounter posts related to your business. Those are great moments to connect naturally with prospects and potential partnerships.

Note: you can send a DM on Twitter & LinkedIn or an Email from the same place 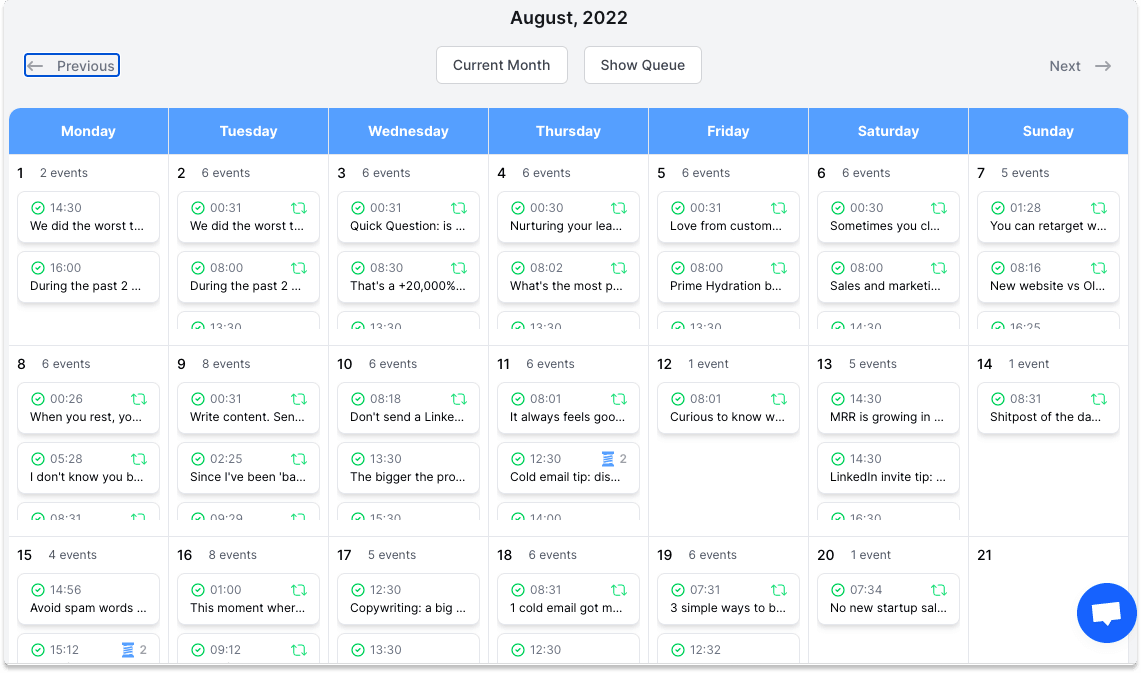 To me, talent doesn't exist, it's all about consistency. The most successful people on Twitter have been the most consistent ones.

The most famous example is Justin Welsh, here's a post that shows his resilience: 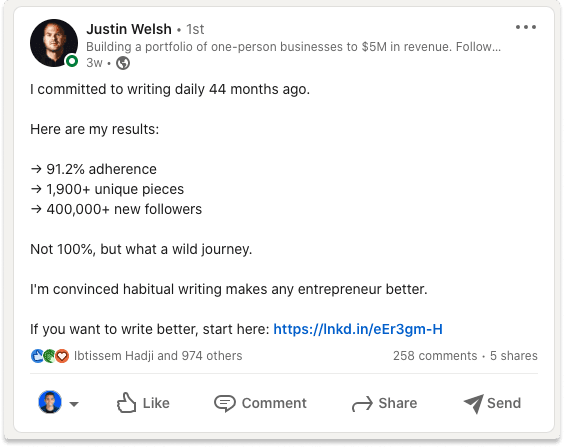 Successful social sellers on Twitter tweet 3 times a day on average. They also reply to 20 to 40 tweets a day, including the replies they receive under their tweets.

At the peak of my Twitter social selling growth, I think I was tweeting 70 times a day. Sounds like a lot, but in 1 productive hour it could be done.

Note: Andrew always use the word startup in his tweets, always.

If I had to keep only 3 key tips for tweeting, it would be to:

The hook makes about 95% of your tweet success. The common playbook on this topic is the following:

Using numbers is also really helpful. The goal is to keep it short but exciting at the same times.

Conclusion: make many iterations of your tweet and observe what all the top performing ones have in common.

5°) Reaching out to prospects

There are multiple ways to reach out to people when doing social selling with Twitter.

Reaching out to B2B influencers 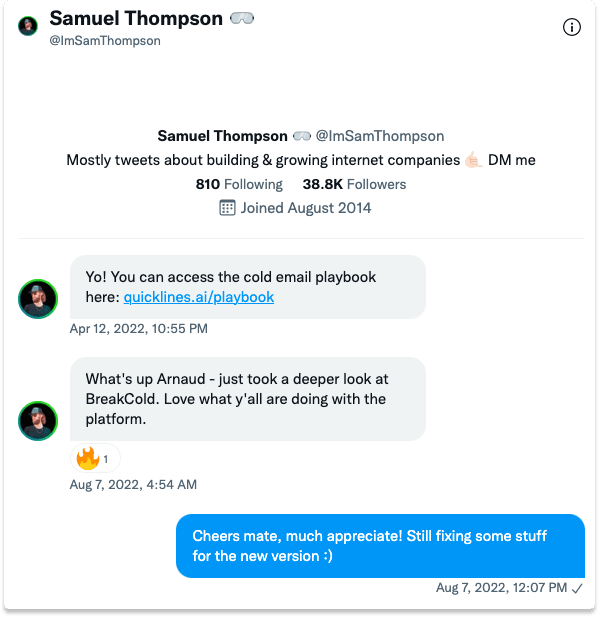 Note: Samuel came back to me after I engaged with his tweets

Twitter B2B influencers are busy people, if you want to do business with them, you need be patient and play it smart.

1/ Interact with their posts first

Try to like and comment their tweets multiples times before reach out. That way, they will automatically remember you even if your message is poorly written or sales pushy a bit. 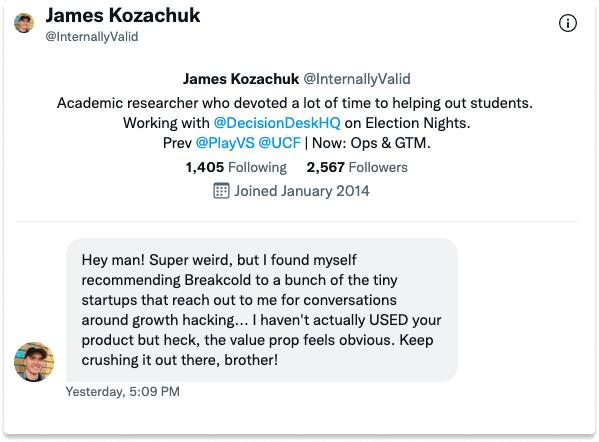 Note: James crafted a stunning cold DM to contact me

If you followed step 1, you actually don't need to hyper-personalize your DM but just in case do it to maximize your reply rate close to 100%.

Use recent content they posted or old ones along with company news to craft a compelling DM.

If people don't reply to you, it's most of the times because they're busy, especially B2B influencers. You need to follow-up.

Even billionaire Ryan Breslow needs to follow up 15 times another CEO before creating a business opportunity. 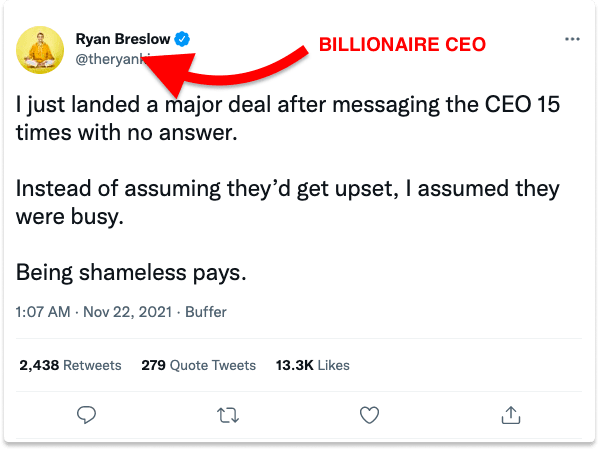 Social selling with Twitter is all about building B2B relationships. Some automation tools can heavily damage your growth. 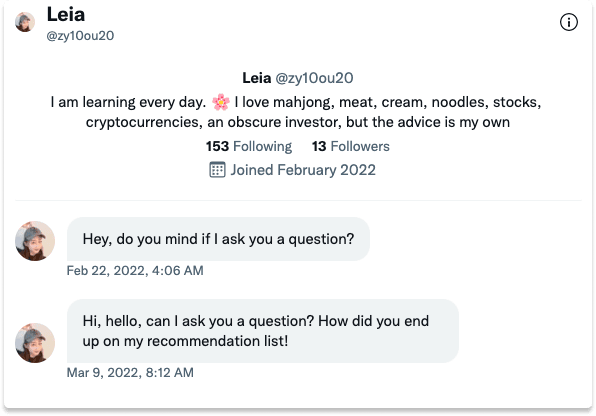 There are many messages like this one on Twitter. These messages won't get you replies, stick to something more personalized. People will think that you used automation tools or that you're a bot. 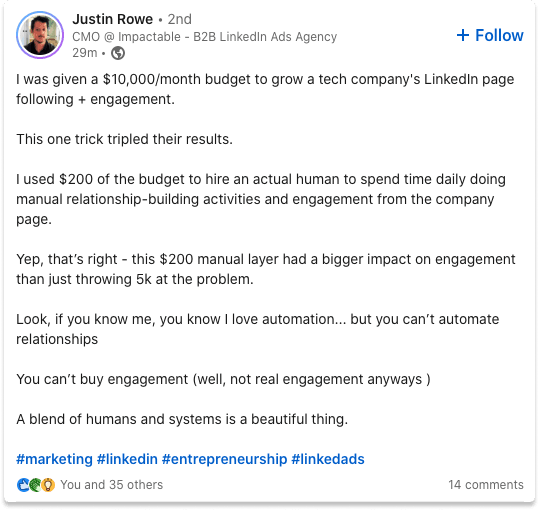 Automating these actions can get you banned temporarily or permanently from Twitter.

Tip 1: talking about yourself gets better ROI 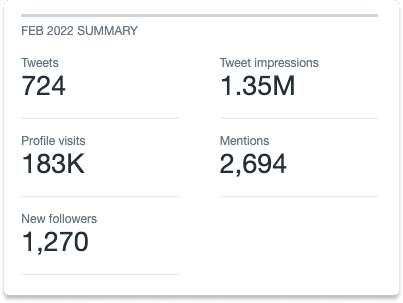 Note: my social selling stats on Twitter for a given month

I had many viral tweets but sometimes it brought me no business at all.

When I looked at the data I noticed that the ones who brought business to Breakcold were the ones where I talked about myself. If people are interested about you, they will check what you're selling.

Conclusion: optimize your tweets to talk about yourself sometimes to get more profile views and so more clicks on your product or service.

The problem with most sales reps in any kind of businesses, including founders is that they absolutely want to sell straight away their product or service.

The thing is, people buy from people and not from robot who are doing copy pasted messages.

Don't be sales pushy, ask questions and keep it short.

If you engage with what I called 'super fans', they will see your tweets straight away when they open twitter which is perfect for your social selling strategy.

When I talk about engaging with Twitter profiles, I mean proper likes and comments under their posts and not some tasks.

Yes it's manual, but the ROI will be much higher!

It's always hard to know to use twitter for social selling, so here's a few examples :) 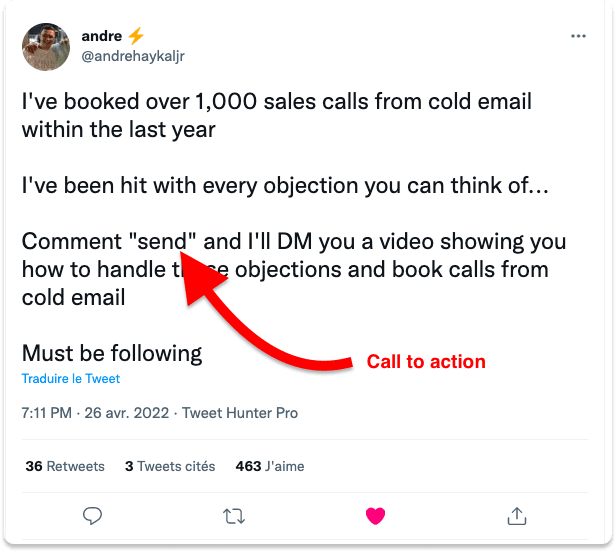 This is the playbook:

Just saw your post about Social Selling. I don't see often tweets about this topic backed by data, congrats! :)

We should talk about this someday!"

Ready to step up your Social Selling game on Twitter?